An Evening with
​Transformation Ensemble 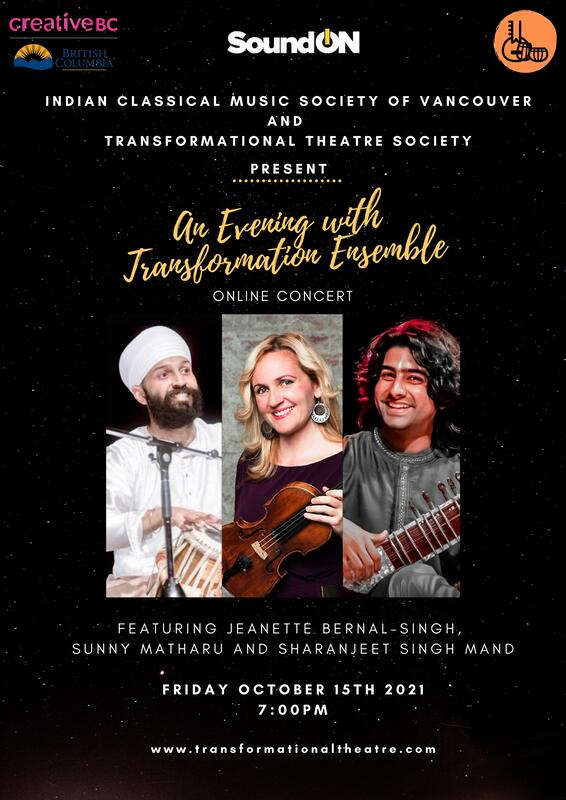 Jeanette Bernal-Singh is both an accomplished violinist and a captivating performer. She has not only played with the VSO for several years, but has also worked with many prominent international musicians and composers. Her fondness for Indian music has led her to collaborate with several Indian classical musicians over the years, always with delightful results. In this performance, Jeanette will perform one violin piece with piano accompaniment by Christina Tong.

Sharanjeet Singh Mand is beloved by many as a sitarist for his whimsical, joyous style, particularly for his proficiency in gayaki ang, where the artist “sings” through the instrument. Having played sitar since his youth, in 2018 Sharanjeet was the first Indian classical musician in history to give a solo performance at the Juno Awards. Then in 2019, he was named one of CBC’s Top 30 Under 30 Hottest Classical Musicians, being the first Indian musician to make that list. In addition to playing sitar, Sharanjeet has also composed some of the selections to be played at this premiere performance.

Joining Jeanette and Sharanjeet will be the dynamic Sunny Matharu on tabla. Sunny has carved out a niche for himself as one of the most recognizable tabla players in the Vancouver area, having accompanied a number of notable Indian classical musicians and vocalists. His dedication to Indian Classical Music has led him to become not only an accomplished performer and committed teacher but also a lifelong learner as he continues to study tabla with Pandit Yogesh Samsi, one of the foremost tabla players in the world today.

Transformation Ensemble was formed after all three musicians performed in a “Music and Meditation” event filmed at Surrey Arts Centre. Although they did not perform together, with Jeanette presenting a Western Classical piece and Sharanjeet and Sunny playing an Indian Classical piece, the three of them envisioned creating something together and a new collaboration was born. This sparked another collaboration between the two organizations, Transformational Theatre Society and Indian Classical Music Society of Vancouver who have come together with the generous support of SoundON, Creative BC and the Province of British Columbia to make this event possible.