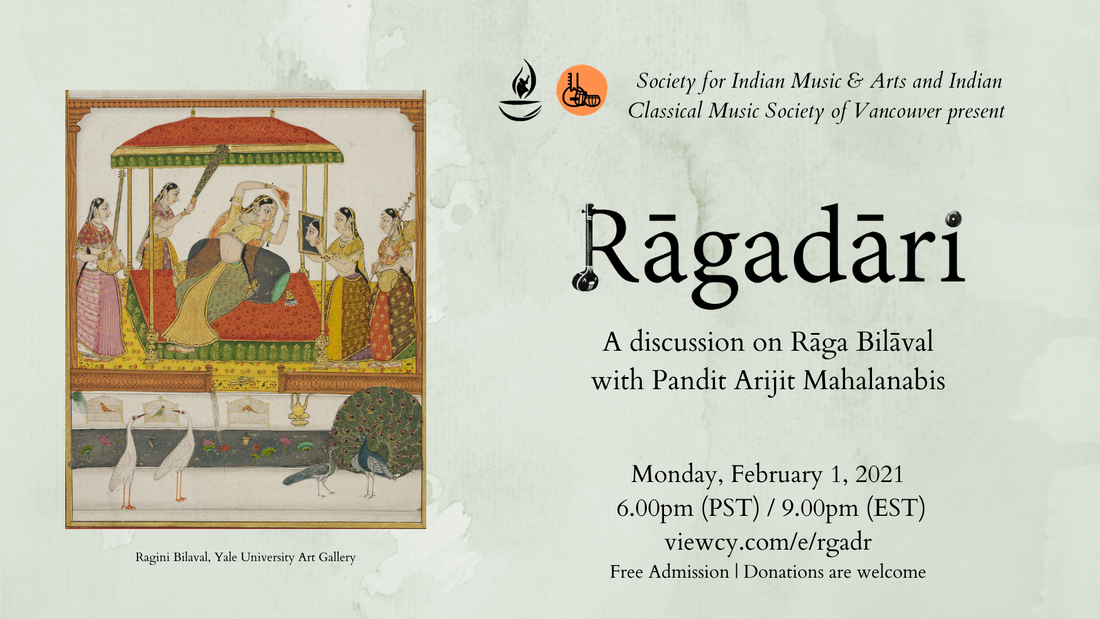 ​
​About the Rāgadārī Project: Bhāratiya Sangīta Rāgadārī (the Rāgadārī Project) is an effort led by Arijit Mahalanabis, the founder and senior guru at the Society for Indian Music and Arts (SIMA), to document the theory and repertoire of the rāgas of Hindustānī music. In addition to full length recordings of dhrupad and ḳhayāl renditions in each rāga, this project will also produce recordings of compositions available in each rāga, as well as a technical paper discussing the theory of the rāga. The exploration of the rāga will culminate in a lecture demonstration by Arijit, with an interactive session with the audience at the end of the presentation.

About the session: Rāga Bilāval is the aśraya rāga of Bilāval thāṭ. In this session, we will consider this rāga carefully, and probe its relationship to its parent thāṭ. We begin by discussing the basic characteristics of the rāga, as it is understood today. Closely allied to Rāga Bilāval is Alhaiyā Bilāval. Indeed, many do not consider these two rāgas to be different from each other. We provide arguments for each conjecture, considering these two rāgas to be the same, as well as the opposite hypothesis, that they are significantly differentiated from one another, providing evidence for each position. We look at the canon of compositions in Bilāval, drawing from different repertoires, and attempt to deduce an evolutionary trajectory for the rāga. We then abstract out the characteristics of the rāgānga Bilāval and discuss briefly some of the other rāgas that are found in the rāgānga. We also look in a cursory fashion at nearby rāgāngas and how they are differentiated from Bilāval. We end by considering rāgas in traditions outside of Hindustānī music that bear a melodic resemblance to Bilāval.

This event is co-organized by the Society for Indian Music and Arts (SIMA) and the Indian Classical Music Society of Vancouver (ICMSV).