Rāga and Rasa: Beyond the Obvious and the Problematic 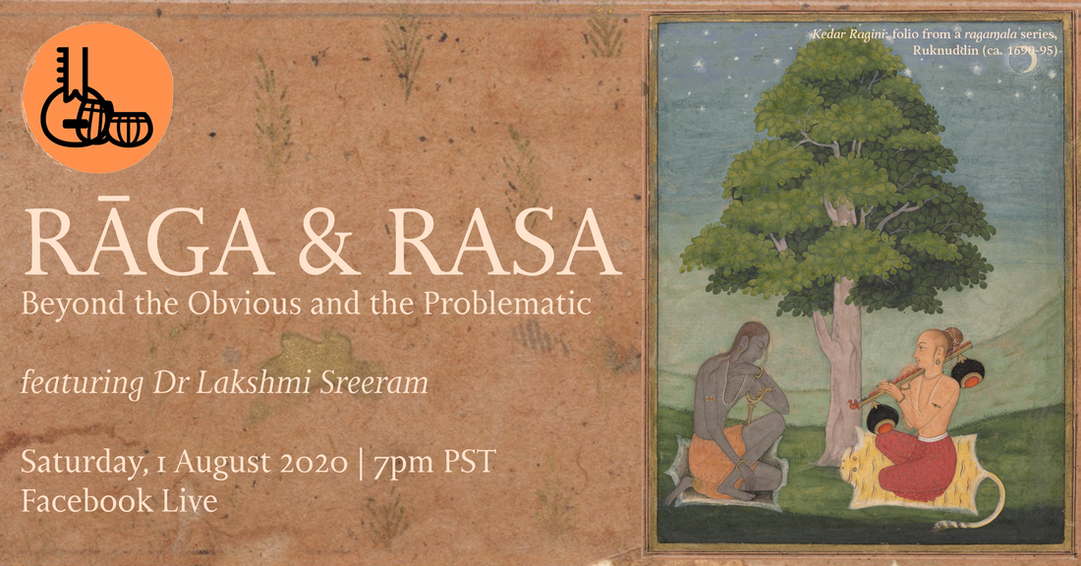 Rasa as an emotive experience is often evoked in the context of rāga talk. Rasa here is simple intended as an intense emotive experience. The rasa theory, however, is an intricate and complex theory of experience of theatre and literature, and as such, its application to other areas or forms of art like music, painting, etc., is problematic.
This talk will argue that though rasa as an intense affective experience is an obvious category to use while talking about rāga, the rasa theory is not applicable in its entirety to rāga. The talk will also suggest that some insights of the rasa theory are eminently applicable to rāga and are useful to advance an understanding of rāga, specifically in articulating the experience of the emergence of rāga or rāga-bhāva. This experience of rāga-bhāva is simultaneously cognitive and affective, and the rasa theory can be drawn upon to articulate this experience in which the two are married into an integrated whole.
Presenter Biography

​Lakshmi Sreeram is a performer of the two major traditions of Indian art music—the North Indian Hindustānī and the South Indian Carnatic music. Both are based on principles of melody-making governed by rāga but with quite different musical textures and presentation. Lakshmi holds a Ph.D. in Philosophy from the University of Bombay, Mumbai. Her Ph.D. thesis was in the area of literary theory in the Sanskrit tradition of Alankāra-Śāstra. She has been a guest faculty at IIT Madras, and is also a freelance writer. She has put together a widely-acclaimed online course, Appreciating Carnatic Music. She has contributed articles on matters cultural to Firstpost regularly, and also The Hindu, and Sruti. Lakshmi has been awarded the Fulbright-Nehru Professional and Academic Excellence Fellowship (2019-2020). She is attached to the College of Music, Colorado University, Boulder, where she will be teaching improvisation in Indian music as well as researching improvisation in jazz. One of Lakshmi's current projects is to put together an online course on rasa as an aesthetic theory, in which she will present the development of the theory of rasa in the Sanskrit tradition of alankāra-śāstra. We were lucky to feature her in our Śāstra aur Prayoga conference in 2019., and are thankful for this opportunity to feature her again.