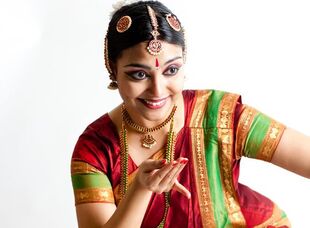 ​Read our interviews with the artists of Parāśakti on our new blog!

Parāśakti: The Flame Within is a soul-elevating, consciousness-expanding celebration of Indian classical music and dance, where storytelling comes alive through artistry from across the north and south of India of some of Canada’s finest performers. This brand new production explores the Goddess’ many narratives and iconographies through sublime classical Indian music and dance.

Vancouver-based dance artist Arno Kamolika‘s work seeks non-traditional storytelling through the traditional framework of Bharatanatyam, while she explores her Bengali heritage and skillfully draws from music, theatre, mime and other dance forms to create an informed artistic narrative. Born and raised in the Lower Mainland, Hindustani vocalist Akhil Jobanputra’s artistry is introspective and personal, while reaching ever outward to the metaphysical.

Joining co-directors Kamolika and Jobanputra are a vocalist and three gifted instrumentalists. Srividhya Sairam is a Carnatic vocalist from Chennai, India, an alumna of the notable Kalakshetra Foundation. Percussionist and mridangist Curtis Andrews learned Carnatic music from legendary Vidwan Sangita Kalanidhi Sri Trichy Sankaran, though his playing is also informed by extensive work in jazz, African, and other musical forms. Sitar player Sharanjeet Singh Mand was the first non-western classical musician to make CBC’s “30 Hot Classical Musicians Under 30”. Satpreet Singh is an accomplished tabla and dilruba player.
​
Presented in affiliation with the Chan Centre for the Performing Arts, the Asta Alliance Association, the Indian Summer Festival, and the Centre for India and South Asia Research within the UBC’s School of Public Policy and Global Affairs.